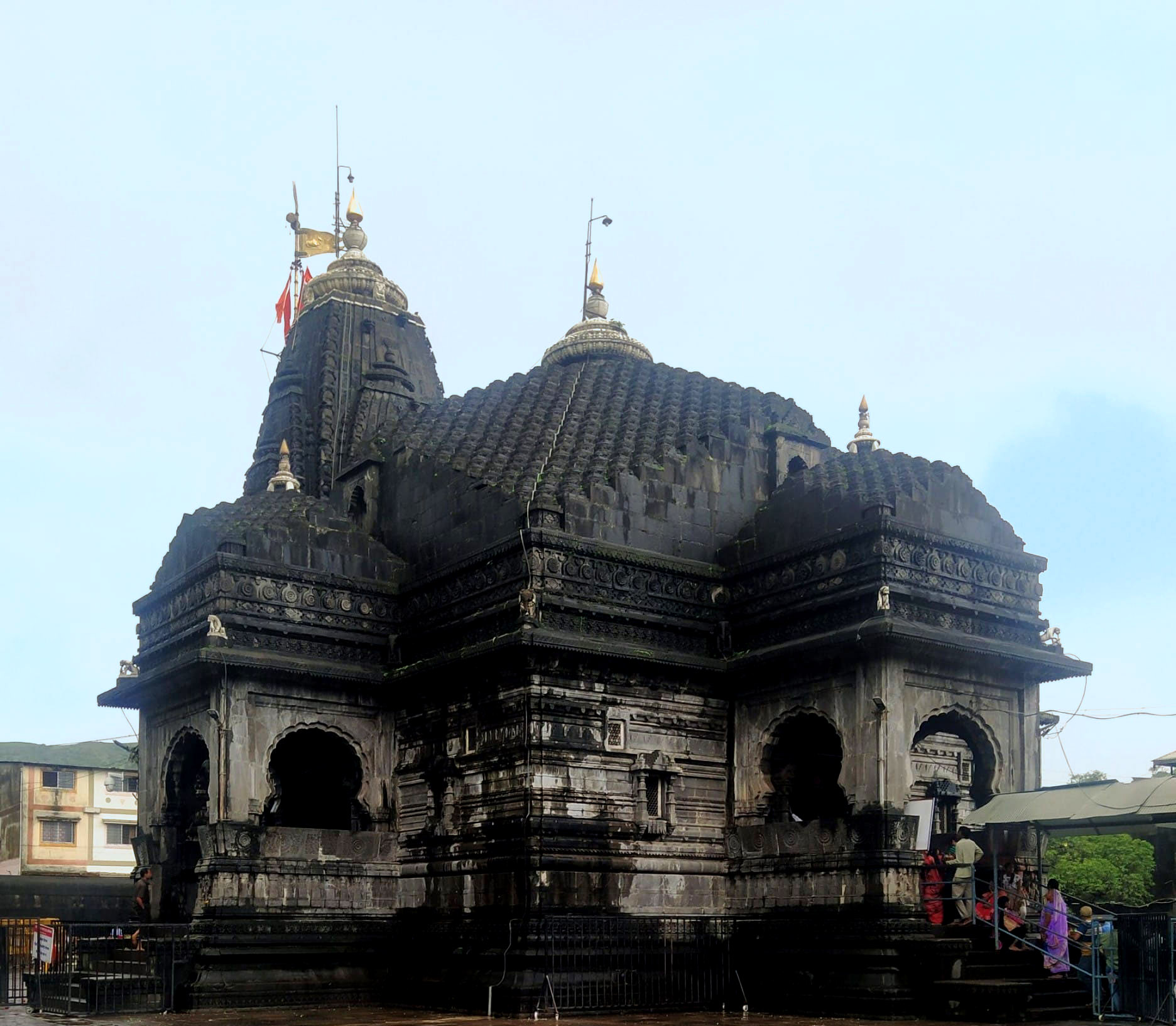 The following verse shall explain the importance of this sacred place and the next one gives names of the Twelve Jyotirlingaas in India. This says that anybody who visits Trimbakeshwar attains salvation. There is no sacred place like Trimbakeshwar, no river like Godavari, no mountain like Bramhagiri etc.The reasons for its being so sacred are - Godavari river originates in this place,

its a place of Tri-Sandhya Gayatri, the birth place of Lord Ganesha, a place of the first Nath of Nath Sampradaya consisting of Gorakhnath and others, a place where Nivrittinath was made to imbibe the holy knowledge by his Guru Gahininath, a place where Nivrittinath made his brothers and sister attain the self by his preaching. This is the holiest place to perform Shradha ceremony like Narayan nagbali As per Nirnaya Sindhu - a religious book of Hindus.

Trimbakeshwar Temple is one of the holiest and sacred place for Hindu pilgrims and is revered as a one of the 12 Jyotirlingaas shrines of Lord Shiva. The temple lies in the foothill of mountain Bramhagiri which is the origin of river Ganga (called here by name Godavari).

The most attractive part of this temple is presence of 3 linga's each representing Brahma, Vishnu and Shiva. All three resides in a hallow space within the Shiva lingam.

This temple is built by Shri Nana Saheb Peshawa in 1755-1786 AD .Its is built with black stone and the Shivlingam is said to be emerged naturally. The temple is bordered with around 20-25 stone feet wall in height

Temple is just 10 min walk from the bus stand and thus no need for auto's. Entrance gate will lead us to the queue which has logical separation of around 6-7 lines. The queue to the main temple passes through Nandi temple which is built in front of the Shiva temple, Nandi facing Shivlingam (as we know Shiva temple always has Nandi Idol where Nandi always faces Shiva lingam .Nandi Idol is sitting on a platform which is a foot or two in height and is carved out of white marble. Crossing this Nandi temple we step in to the Shiva temple .Then we enter a big hall whose roof is in dome shape from inside. The sanctum is not big and houses the main Shivlingam and three lings residing in hollow structure. Outside the temple just in-front of entrance gate, one can see few cows self feeding the grass. 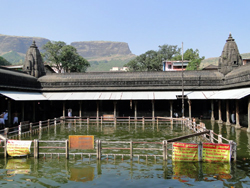 Just a 5 min walk away from main temple there is a sacred pond called "Kushavarta" which is from where river Ganga takes here route to the rest of India. A dip in this sacred river wipes off the sins, is the belief of people. The sage Gautam committed a sin of murdering a cow and by taking bath in this river, wiped off his sin & gets rid off of all its sin's if he takes bath here. Story has that, Sage Gautam forced river Ganga to stall within the enchanted grass area he made and puts a vow on her. This he done so to take a holy bath in this water and to get rid of his sin for killing a cow.

Sheemant Rao Sahib Parnekar built the temple around the stalled water at this place which we are seeing today. The walls inside all along the hall is inscribed by various Idols, and in all corners are some small temple. The most important fact of this pond is that it is the starting point of Kumb Mela which happens once in a 12 year and next is on 2015. Saints all over the world come to this place on the occasion of mela to take a holy bath.

There are certain time allotted by the government abiding which Saints needs to take bath. They take bath in the sequence of their seniority and once they are done then rest of normal peoples can proceed. As per the rule the sadhus (Saint) belonging to "Vaishnav" sect will take bath in Godavari at Ram Kund, Panchavati and those belonging to "Shaiva" sect will take bath here. Since Godavari (Ganga) flows from here and reaches at Ram Kund so both are considered pious. This rule was set by Peshawa during the time where in one of the Kumb mela these two groups fought with each other over who would take the holy bath first which resulted in hundreds of death. 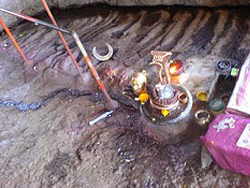 Another attraction of this place is the Bramhagiri Hill, which is the origin of the river Ganga and is named here as Godavari. To reach the top of the hill one needs to go through some 700 steps and usually needs 4-5 hours to cover. Trimbakeshwar Temple is perched on the picturesque lusting green Bramhagiri hills. River Godavari originates on this hill and flows though the Bramhagiri ranges

Original Ganges and Trimbak Tirtha are on Bramhagiri mountain adjacent to Trimbakeshwar temple. Bramhagiri is considered as a huge form of Lord Shiva and hence the mountain climbing was considered as a sin.However in 1908 Seth Lalchand Jashodanand Bhambhani of Karachi and Seth Ganeshdas built 500 steps of stone at a cost of Rs. 40,000 then this has facilitated easy access to Bramhagiri. Godavari is flowing in three directions on the mountain. The one flowing towards east is called Godavari, one flowing towards the south is called Vaitarna and the one flowing towards the west is called the west-flowing Ganga and meets Godavari near Chakra Tirth. River Ahilya meets Godavari in front of the Trimbakeshwar temple. Childless families worship at the Ahilya sangam and it is believed that they do get a child. The first peak of Sahyadri is called Brahmadri. The story associated with this is that Shankar was pleased with Brahmadev and said “ I shall be known by your name”. Hence it is called as Bramhagiri. The mountain is 1800 feet high . Its height from sea level is 4248 feet. Five peaks of this mountain are called Sadyo-Jata, Vamdev, Aghora, Ishana and Tat-Purusha and are considered as five mouths of the Lord Shiva and they are worshipped. 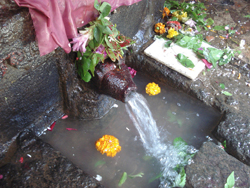 Gangadwar is half way to Bramhagiri mountain. There is a temple of Ganga, now known as Godavari River. Ganga appears first time here, after it vanishes from Bramhagiri Mountain. Godavari comes to Gangadwar from Brahmadri. There are 750 steps to Gangadwar. These were built by Karamsi Ranamull of Village Maska. The work was commenced on 1st of Chaitra in Samwat 1907 and was completed on 5th of Chaitra Samwat 1918 by Seth Hansraj Karamsi. Gangadwar is one of the five tirthas. There is an idol of Ganga and near her feet is a stone of the shape of cow’s head through which Ganga water is flowing drop by drop 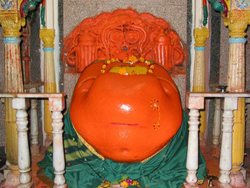 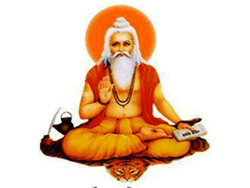 Gautam Tirtha is to the south of the Ganges and the Trimbakeshwar temple. Varun being pleased with Gautam gave this tirtha as a permanent source of water. To the north is Gautameshwar and to the south is Rameshwar Mahadev. This tank is 600 x 400 ft and is built by Shrimant Pandit Zashivale at a cost of Rs. 50,000.00.

Bilwa Tirtha is to the north of Nila mountain. It is one of the five tirthas. There is a temple of Bilvakeshwar Mahadev built by Naro Vinayak Gogte in 1738 at a cost of Rs. 25,000.00. 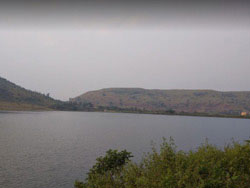 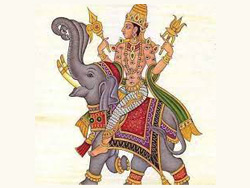 BIndra Tirtha is to the east and near Kushavarta.This is known as Shakra-Kupa for Indra wiped off his curse given by sage Gautam for enjoying Ahilya, by a bath in this tirtha.This is built with cut stone in octagonal form by Vishnu Mahadeo Gadre at a cost of Rs. 22000 in 1778.On the bank of the tirtha is a beautiful temple of Indreshwar Mahadev with an idol of Indra seated on an Airavata elephant.Besides this there are Vishwanath tirtha, Nilambar tirtha or Moti-tank, Mukund tirtha, Prayag tirtha and Veni-Madhav and other Mahadev temples on the bank of Prayag tirtha. Here is a matha of Nirvana Sampradaya (sect) Nilganga tirtha and nilsangameshwar Mahadev temple are on the north bank of Godavati.

To force Gautam to give up his penance, a friend of Ganga named Jatila took the form of Ahilya, Gautam’s wife. Gautam could make it out and cursed her to be transformed into a river. Then she begged his pardon. Gautam granted her pardon and said that she will be freed of her curse on her joining with Godavari river. This is the Ahilya-Sangam tirtha where Ganga and Godavari join. There is a temple of Sangmeshwar Mahadev. 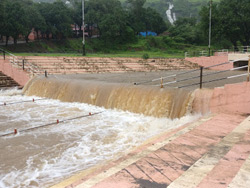 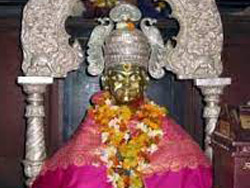 The temple of Shree Nivruttinath is near Gangadwar Sampradaya consisting of Gorakhnath and others. Nivruttinath was made to imbibe the holy knowledge by his Guru Gahininath. A place where Nivruttinath made his brothers and sister attain the self by his preaching